In 1954  Major Warren H. Cooley  and his wife Alice  were invited by a fellow army officer to spend some time at a place called Wawona.    During this visit they both fell in love with the fantastic surroundings and peaceful environment.  At a party on the last day of their stay Warren pulled Richard Moore Sr. (original owner and developer of the Redwoods) aside.  He pointed to a knoll across the lane and said “Build me a cabin right there!”.    At the time, there were little more than a dozen cabins in the Redwoods complex.  The dream was established.  Six months later, with financial assistance from Zella Gautschi  (Alice’s mother) the dream came true and Cabin #24 came to be.

Cabin 24 has seen many visitors and many changes over the years.  The completion of Cabin 24 came less than 10 years after Wawona received electric power and the same year as the Yosemite Flood of 1955.

On the night December 21st of 1996 a relentless snowstorm engulfed the Sierras  dumping several feet of snow in just a matter hours.  One week later this unusually large snow pack would prove to be a contributing factor to the Yosemite Flood of 1997, which did considerable damage and altered the course of rivers throughout the park.    In the early morning hours of  December 22nd, with the snow still falling, this storm devastated Cabin #24.    A 100 foot pine tree surrendered to the weight of the snow,  and broke off 20 feet up, with the remaining 80 feet falling directly onto the unoccupied cabin.   The impact of the tree dislodged the gas water heater exposing the now free flowing gas to the still burning pilot light.  Cabin 24 was destroyed.

In single night of natures dramatic flurry,  the cabin that stood for over forty years was reduced to charred redwood and piles of rubble.

The primary and most beautiful of Nature’s qualities is motion, which agitates her at all times, but this motion is simply a perpetual consequence of crimes, she conserves it by means of crimes only.  Marquis de Sade (1740–1814), French author.

There is nothing exempt from the peril of mutation; the earth, heavens, and whole world is thereunto subject. Sir Walter Ralegh (1552–1618).

The lapse of ages changes all things—time, language, the earth, the bounds of the sea, the stars of the sky, and every thing “about, around, and underneath” man, except man himself.  Lord Byron (1788–1824), English poet.

The Storm that demolished the cabin also dramatically altered many areas throughout the park as nature continues her ever evolving cycle of transformation.

Anything in history or nature that can be described as changing steadily can be seen as heading toward catastrophe. Susan Sontag (b. 1933), U.S. essayist.

All things change, nothing is extinguished. . . . There is nothing in the whole world which is permanent. Everything flows onward; all things are brought into being with a changing nature; the ages themselves glide by in constant movement.  Ovid (43 BC), Roman poet.
If we want everything to remain as it is, it will be necessary for everything to change. Giuseppe Tomasi Di Lampedusa (1896–1957), Sicilian author.

Let the great world spin for ever down the ringing grooves of change. Lord Tennyson (1809–92), English poet.

You could not step twice into the same rivers; for other waters are ever flowing on to you. Heraclitus (c. 535–c. 475 B.C.), Greek philosopher.
Upon receiving the news on the morning of December 22, 1996, without a moments hesitation nor a second thought the goal was to rebuild.
In over forty years there have been numerous joyous moments and remarkable experiences at cabin 24.  Some were captured on film others live only in memory.
It's a pleasure to share one’s memories. Everything remembered is dear, endearing, touching, precious. At least the past is safe—though we didn’t know it at the time. We know it now. Because it’s in the past; because we have survived.  Susan Sontag (b. 1933), U.S. essayist.
A man’s real possession is his memory. In nothing else is he rich, in nothing else is he poor. Alexander Smith (1830–67), Scottish poet.
Very little survived the December 1996 fire. During the summer of 1996 some items which were slowly deteriorating at the cabin were removed for restoration.  An old cartoon map which had hung on the wall for over 30 years was one of these items.  A sample of this map is below. 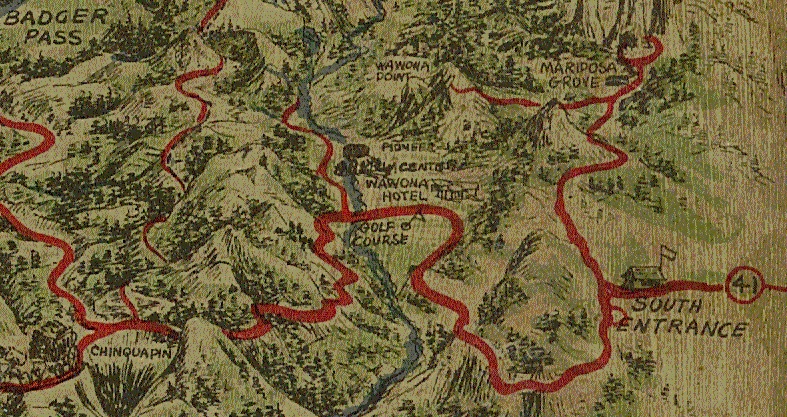 A portion of old map is shown at near actual scale to provide a feel of the detail presented by the artist.
Perhaps the most cherished items which remain from the original cabin were two guest books, full of our guests thoughts and expressions of their stay at cabin 24.  Six additional guest books were lost in the fire.  A few pages of these two surviving books are reproduced and displayed below.  Enjoy.
Yosemite Vacation Rental - Wawona Cabin 24